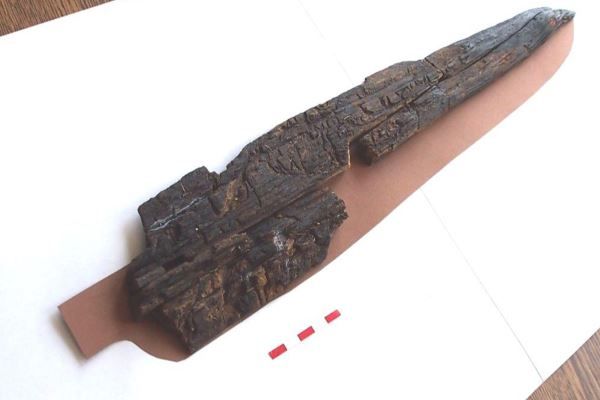 A spear from 9 thousand years ago. An unprecedented find near Szczecin

Archaeologists studying the remains of a shaman sanctuary in Bolków near Lake Świdwie have discovered a ritual spear dating back nine thousand years. The find is wooden and has the remains of an engraved decoration on it.

Researchers boast that it is the only such finding in Europe. And indeed it is an unusual monument. ByóThe trunk is probably made of ash. It’s shaped like a pióra oars. The unearthed fragment is 40 centimetersóin length and 10 centimetresóin the width.

– Construction of the trawlóHowever, it is too early to tell whether the object was a ceremonial one, but above all, the presence of ornamentation means that the object had a ritual character, connected with the beliefs of the peopleóin Mesolithic people who lived in settlements and hunting camps located by the lake – The head of the excavation, prof. Tadeusz Galiński.

Previously found by an archaeologistóObjects from the Mesolithic period were often ornamented. But finds with decorations in antler, bone or on stones are hardly decipherable. The tooth of time has erased the richness of the ritualóThe ornaments are depicting images of animals, plants or human figures. However, in the case of the one found inóThe researchers from the Szczecin branch of the Institute of Archaeology and Ethnology of the Polish Academy of Sciences used X-ray technology.

Study reveals the presence of a breakóThe spear is made up of a number of geometric figures, a zigzagóor herringbone. But there are also three human figures depicted in a ritual scene. One of them has a mask – According to prof. Galinski shaman. Another is shown in a pose that suggests a ceremonial dance. The last figure carries an object, possibly a sacrificial gift. The whole scene shown on theóThe story takes place on the shores of a lake. It shows boats and an encampment in the distance.